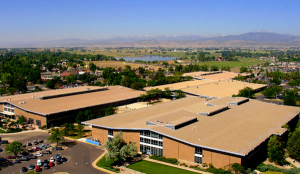 After doubling in size within the past two years, Epic River’s need to increase its office space was becoming urgent. Originally located in Loveland, Colorado, the company needed office space that would be conducive to the high-tech company’s growth patterns while remaining located near northern Colorado’s two primary transportation arteries, Interstate 25 and U.S. Highway 34.

So when company executives began researching the 177 acre parcel known as the Rocky Mountain Center for Innovation and Technology, the company took note of the more than 811,000 square feet of office and manufacturing space. The campus, formerly owned by Agilent Technologies and now managed by Cumberland and Western, provides ample room for companies to locate a large operation in a single location and still have room to grow.

Epic River began to focus on building D, the largest of the four available buildings, which included newly renovated offices, a walkout garden level, and a beautiful courtyard between buildings C and D. And the campus’ mountain views of Colorado’s northern front range, the Big Thompson River Valley and the city of Loveland wasn’t anything to ignore either.

Epic River is planning an office build out over the next few months and will be the second tenant to the RMCIT when it relocates its office headquarters in spring 2014.